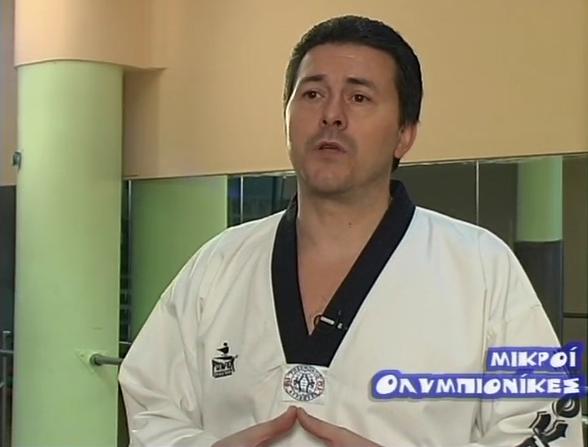 The present documentary is the first one to be made on Taekwondo in Greece. Its creation started in October 2003 and was completed in March 2004. Its purpose was to advertise Taekwondo in light of the Olympic Games in ATHENS in 2004; acquaint the general public in Greece with the new Olympic sport (since it had never been promoted as it should have); and present every aspect of Taekwondo (competition, traditional, self-defence, entertainment, education) in the living room of every household, in a positive way, as well as the benefits derived from exercise so, that viewers of any age would be convinced Taekwondo is worth practicing.

I had to submit a written request to TV channel ET3 and to the Aristotle University Faculty of Physical Education and Sports Sciences, in order to create this documentary on Taekwondo only. As a result of discussions, the “LITTLE OLYMPIC CHAMPIONS” TV sports series was created. It was a series on 24 Olympic Sports in 10 documentaries (Tkd alone was exclusively covered in a 26-minute documentary).

The documentary on Tkd has been broadcasted many times since 18/4/2004 (the first day of the Olympic Games, between two football matches), and is being broadcasted to this day. The LITTLE OLYMPIC CHAMPIONS sports series was among the five best shows on TV (“VIMA” newspaper, part of TV-GUIDE, 22/5/2004).

I took on the science edition part on Taekwondo. I wrote the text which is being read in the entire film and composed the exercises and techniques which we had to film in order to complement the text in a harmonious way. I also gathered the athletes who appear in the film and organized shooting. Three cameras recorded all of the techniques: it took six weeks in order to record every technique on the list, the tape and the second it had been recorded, and which version was the proper one to stay or the one to be dismissed. I spent two more interesting months (in a directing seminar) with the TV ET3 director in order to match the techniques with the audio text on the film. Images alternate rapidly, scenes go by very fast, and shooting angles constantly change in order to keep the viewer interested, given the length of the film.

I would like to sincerely thank all the coaches and athletes who accepted the invitation.

They deserve the warmest CONGRATULATIONS on the beautiful result obtained.