TAE KWON DO. THE WAY TO WIN. The Science of the Fight

Home Portfolio TAE KWON DO. THE WAY TO WIN. The Science of the Fight 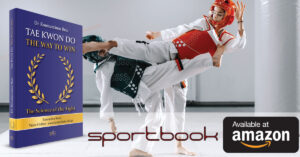 The book “TAE KWON DO. THE WAY TO WIN. The Science of the Fight” delves into the development of Taekwondo as an Olympic sport; it reveals the hidden sides of sparring, supports daily training, and describes in detail every technique (kinesiology, kicks, punches) and combinations (in total 477). It is the first book to internationally document a classification of every kick and its kinesiology and every technique and its variation in categories (i.e. attack or counter-attacking one step, in two steps, etc.) to facilitate accurate and fast learning.

The book is 392 pages long and is divided into 24 chapters.

Practice Part “A” is an analysis of Kinesiology:

Practice Part “B” is an analysis of every kick:

The techniques and tactics used in sparring are described in detail for every move, in conjunction with parameters such as flexibility, injuries, and biomechanics. An analysis of the advantages and disadvantages of each move and frequent mistakes made by athletes, and negative effects, follows. Each technique is first described in its basic execution and then its variations and combinations are described from the easiest technique to the most difficult.

THE BOOK IS ALSO READY IN ELECTRONIC FORM (E-BOOK) AS AN INDEPENDENT BOOK, OR TOGETHER WITH THE PUBLISHED BOOK.

For the first time, all the techniques are presented in a realistic manner on video (not DVD due to limited capacity, but online) with the same Chapters, order and numbering as described in the book. The videos were taken and processed by specialized professionals in HD (high definition). The recording was done with three cameras at the same time, from two angles (frontal-front and diagonally-sideways). The techniques were filmed in slow motion from both recording angles.

Access to the videos of the book is easily achieved through PC, Laptop, Tablet or Mobile Telephone only with exclusive CODES accompanying each book and allow free internet connection at:

For the first time, internationally, all sparring techniques are displayed in short in separate tables so that they can be taught by the instructor in a way that is pedagogically correct. The division of the techniques considered primarily -and most importantly- the degree of difficulty in relation to a child’s age (maturity and potential) and secondly, their level of capacity based on rank (color or black belt).

The specific objectives of the proposed teaching techniques are: safety in execution by children athletes, progressive-gradual increase in difficulty, and smooth continuous improvement. Moreover, the proposed techniques have been appropriately selected as curriculum for promotion testing in competitive taekwondo, without placing excessive demands on children above their capabilities and limitations due to their young age.

Also for the first time, the competition areas designed in the shape of a cross with “stations” to help the reader better understand the direction of each move and the distance travelled by the athlete with respect to the opponent, and the area as reflected in the sketches, textbooks, and videos on the internet at: www.kostasbeis-tkd.gr

The book is supplemented with 231 images-sketches from photographs of athletes that reflect with absolute accuracy the techniques executed, as well as 44 tables and 56 adages and quotes.

The textbook was enriched with wise adages and quotes so that the reader can become acquainted with the superior intellect and wisdom of important people and pioneers recorded in history for their indisputably valuable contribution to culture and the evolution of mankind. The adages will interest the reader to better understand these brilliant minds so that their daily thought becomes better, more enlightened, and ultimately higher in quality. Some of them are: Homer, the first and greatest of poets; philosophers Socrates, Plato, Aristotle, Heraclitus and Xenophon; the top tragic poets Aeschylus, Sophocles, Euripides and Archilochus; the first historians Thucydides and Plutarch, the academics Pythagoras and Democritus; Hippocrates, Father of Medicine; Sun Tzu, the Chinese theorist of strategy, etc.

The aim of this book is to become an essential tool for athletes who train daily in Taekwondo.

At the same time, the theory part and the theoretical support in each technique complete the knowledge the athlete and the coach must possess. This book is essential, both to coaches and athletes.

Those athletes who will study the book and absorb the information details of technique and tactics, will discover a difference in the quality of daily training, which will yield a more rapid improvement in performance. The viewing of the videos of every technique in the book will ensure proper learning of the techniques and being permanently stored, in detail, in the long-term memory part of the brain.

Special Teaching Staff in Taekwondo (since 1991)